The mighty GU-81M Tube. The picture is deceiving, it measures 260mm tall
and weighs in at 1kg !

It required some repairs before use, these can be seen here.

Before connecting the tube to it’s heater supply, I tested the resistance of the filaments first because it uses a high current supply of around 10A and accidents can be hazardous at these levels. To my dismay, it measured as almost open circuit when it should have been around 0.3 ohms. This pointed to a faulty tube so I emailed the supplier and left it at that for a while.

After a few hours of head scratching, I noticed that the tube used a ‘false’ base for some reason known only to the Russians I suppose (i stand to be corrected on this point though!). The false base pins were connected to the real tube pins via little metal clips. I hooked up the power supply and wiggled the base, there were sparks coming from the contact between the two parts which indicated a bad connection and that the tube itself was probably alright. The false base is shown below. 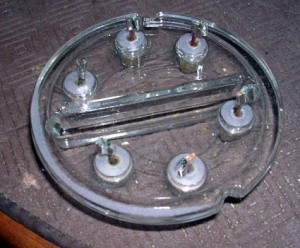 With a bit of careful fiddling, the false base came off to reveal some very rusty and corroded terminals. The tube pins could be cleaned easily with fine sandpaper but the clips were knackered, leaving me with a connection problem. This was fixed as shown below. 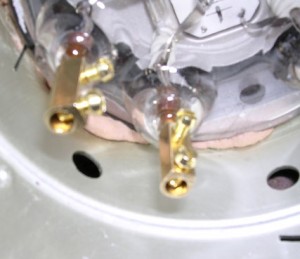 I stripped down some 10A butt-connectors and used the barrels directly on the tube pins, being careful not to twist them in case the glass cracked. The screws could be tightened easily with a long screwdriver through the opposite handily placed holes in the metal skirt.